SB'S PORTFOLIO
I AM

King of my life, hope you are too 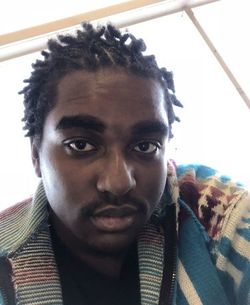 My name is Sebastian Williams, socially called "SebBlack" by friends and in the the world of art and entertainment. I have never been someone who likes staying in one place for too long, which probably explains my childhood. Throughout my life, I've lived in NYC, Washington DC, and most recent move from Las Vegas. I gained my love for graffiti art from Las Vegas' Art District, were muralists and random graffiti artists practice and get paid to do their work on buildings. My mentor was RasOne, a graffiti artist that created a graffiti gallery, basically if anyone wanted to paint on any wall in his vicinity, they had to ask him. Anyways, he taught me all the in's and out's of graffiti art after asking one fantastic question, are you legal or illegal? This question is needed for your lifestyle as an artist, if I was an illegal artist, he would probably teach me ways evading detection from the law and such. Since I'm a legal graffiti artist, I just ask people, show them what I'm gonna put on the wall, and I can paint there. For my High School years, I moved to Raleigh, North Carolina, which personally isn't the biggest on graffiti at all. The only place that I can say is a highlight are the graffiti galleries the city has set-up. I currently practice at Expression Tunnel at the NC State campus.

During my high school career, I learned that tradition is one of the biggest things us as humans try to avoid. And truthfully, it's kind of sad. My way of thinking is, it's okay to keep getting better and more advance, but never forget where it or you came from. A great example of how this is shown in life is African American history. We as a people were taken from our home, religion, and all out way of life. Told that we were not considered what we were, humans, and killed if we tried to defend that fact. Given false information about our country, like how Egypt was never taught to be in Africa. And at the end of it all, told that; "That was a long time ago, why are you still stuck up on that?" And finally to tell you the truth, I'm not made at, because without all of those hardships given to my ancestors, they wouldn't have made the person I've become. Although, because of such a gap in my African history, I've become an Afrofuturist. An Afrofuturist is basically taking modern and futuristic ideas and merging them with African tradition and culture. Kind of like what would happen to Black people, if slavery never happened.  I would explain my way of thinking like two people taking a road trip on a mountain side. People that I've met would be that one person looking at the mountainside, thinking about all the terrible things that's happening to the world. While I'm the guy looking at the cliff side, enjoying the view and thinking, through all the bad in the world, there will always be greatness.

While I'm going into my young adult years, I've already had a plan on what I want to do in life, how I'm going to do it, who can help me, and how long it would take me. For instance, since I've always loved music, specifically classic/inspired by classic hip-hop, R&B, and Jazz, I became a turntablist DJ. I practice that original ways of hip-hop culture to play turntables as instruments and help my generation understand what's the problem with present, more emulatory, way of Hip Hop music. As an artist I want to practice graphic design, clothing design, painting, sculpting, and photography. At the moment I'm doing a type of performance art where I've made 5' headphones and I walk around the city with them, playing music in the background. I've also started a few different clothing and wearable art lines, including outerwear, cuffs, necklaces, and rings, mostly inspired by African and Black culture alike. I believe doing these actions while I'm young and also still learning about how to get better will defiantly make me successful in the way I want. Which is basically me doing what I want and working for something I love, while making enough to fit my wants and needs whenever necessary.

I also consider myself a KING, I know bold statement. I'm a king because I know what I want to do, I'm a big representation for my family and my community, and I will never back down on helping people to as much of a degree as I can. I will also, if needed, protect those in bad situations, weather that be physical, addiction, or just straight up bad decisions. I also know when to step in to curtain situations, seeing as everyone that I consider friends and family, all are strong in their own way (for a few people I know, physically). I'm not perfect in anyway, but I do understand terrible situations, there's an old saying; "a man who has the ability to change won't, unless death is involved", never be tempted into the darkness. Instead listen to me as your guide stay on the lightened path you were given.   ​